I’m here, today, to tell you how wonderful The Longest Journey is, in case you did not know.

This is the story of two complementary worlds – Stark, the world of logic and industry, and Arcadia, the world of spirituality and magic. You play as April Ryan, a girl from Stark who is a shifter and can move from one world to another and who has to restore the Balance, the law that keeps the universe in place.

Why you should play this:

Why you shouldn’t play this:

Thus being said, let’s get to the rave part. And I apologize if it’s gonna be a long post. BUT NOBODY CAN STOP ME.

1. The Longest Journey has one of the best storylines to ever grace the video games industry. You get over 20 hours of non-repetitive stuff, some awesome plot-twists, great characters, story development and no plot holes. The scenario for this game could have been easily turned into a book, really. You have to save not just one world, but two. You have so much to do, both in Stark and Arcadia and whenever the story shifted from one world to the other I felt like I wanted to stay there and discover new things. This game is about balance. Both in the making and in the playing.

2. The characters are so well made. You can only play as April, but you get to interact with 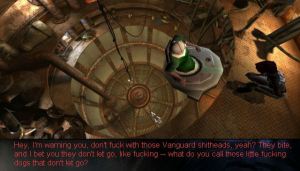 so many characters, all of whom put their mark on your journey. They are relatable, you easily get to either love them or hate them. And April is…pretty much the most memorable heroine I’ve ever played. She’s charismatic, sarcastic, funny and realistic. She’s the typical 18 y/o student and she gets an amazing character development. Not to mention her lines. Oh, my god, her lines. I really feel like writing an entire blogpost with my favourite lines in this game.

April: [Roper Klacks evil laugh] Who was that? Wait, don’t tell me, evil wizard. They all sound like Richard III on crack to me.

April Ryan: There are only two things worse then an empty canvas: death and taxes

April: She. It was a girl dragon.
Emma: What you could tell by the high heels and lipstick?

3. The voice acting is also extremely well done. Considering the fact that the game is based on so much dialogue, this was a must. There are tons of different accents (take Cortez) and different languages (Tobias, Crabman) that make the game so much better. I especially liked how most of the male characters have deep, soothing voices. Except for Crow, of course, but I love his character and his voice acting is also amazing.

1. The game did not age well. It might have been good looking for 1999, but in 2015 it looks like crap. It’s good that you don’t see April’s face most of the time because it’s hilariously horrible and pointy. In fact, everybody in this game is pointy and pixelated. But you get used to it, after the first 30 minutes or so and it shouldn’t stop you from playing this if you really want to play something epic.

2. So. Much. Dialogue. Most of the times it’s not boring and it’s really helpful. But there’s just so much of it! The good part is that you can just right click through the lines so it moves faster, but you might find out that you needed to remember the information. So yeah. You kinda have to pay attention to it. 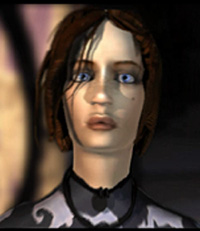 3. You have to watch April run from one side of the screen to the other in a very very zoomed out view. That’s gonna take a lot. I felt like I could just easily watch an entire movie in the time I was waiting for my character to cross the marketplace and get in the city. And there are also those scenes that you can’t skip and can’t move through either (Crow’s landing and taking off, Abnaxus coming down from those stairs, Flipper moving to you). Those are not nice.

4. Some puzzles can get really frustrating (the statues on the island? Hello!) and they might just make you google a walkthrough so you don’t get old turning some symbols around. There’s also the part where you really have to be careful of everything around you because you might not advance to the next point if you didn’t look at a fucking wall or something. (I spent about half an hour not knowing what to do in chapter 11 just because I took my fake ID from Flipper and didn’t give him the star map so the boy wouldn’t come to drop the pizza box so I can continue) Not lovely, but definitely challenging.

This game is a must. I first played it back in middle school, I guess. About…2007 or so? I know for sure that Dreamfall: The Longest Journey (the next part) was already out because I had to play it too immediately.

It’s an epic game. Epic is the best word to describe it. If you love good stories, definitely, definitely play this. It’s wonderful and you don’t get to be bored or lose interest because it’s so captivating. To me, this is the god of adventure games. It all started from here. And if you didn’t play it, but you’re a fan of the genre, I recommend you at least give it a try. You’re gonna fall in love with. (And the graphics go better over the sequels).

I’m off to play Dreamfall: The Longest Journey now. Let me know if you played the game
or not and, if yes, did you like it as much as I did? Also, if you’d like to see more video games reviews / impressions (hopefully shorter that this), like this post. Or comment. Or both, idk. Not your mom. ^^