Ladies and gentlemen, I kindly present to you my first weekly themed post (or whatever it is). I came up with several names for this such as WTF Wednesdays, Weird Wednesdays, Wrong Wednesdays or even Why yes I Want to Kill Myself Wednesdays. Why Wednesdays, you ask? Because I just learned how to spell this word and I’m proud of myself.

I’ll just stick to WTF did I watch Wednesdays because I might stumble upon something WTF-ish, but still good. Do you see my point? No? Me neither.

Anywhore. For the first edition of something that I pray I won’t just give up on, Rukifer brings you… 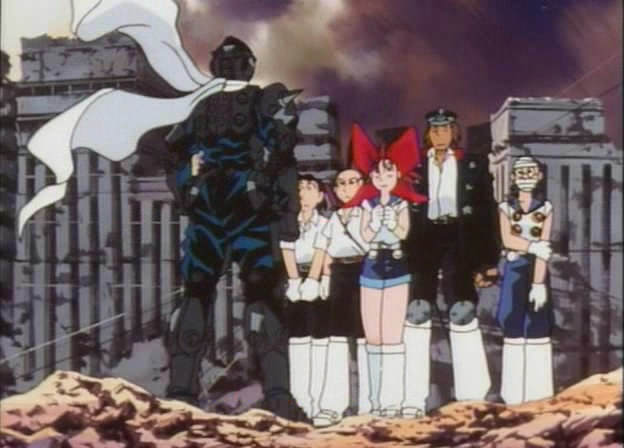 This was sort of recommended to me by a fellow anime buddy who, after my Shit Japan made me watch post, was like “Oh, you thought those were bad? Wait ’till you see fucking Apocalypse Zero”. And so I did. Because I’m watching fucked up shit so you don’t have to.

Mistakes were made, my friends.

How can I explain to you how bad and weird and non-sense this shit right here is? Because my mind is full of fuck right now. Let’s put it this way, tho’. If I were to hashtag this show we would have: #SixTitsBear #SpermWeapon #PotatoHead #FaceNipple #TooMuchHair #BitchSister #IDon’tWantToTouchaBoobieInMyLife #OhGodJustTakeMeNow #ThisIsHorrible 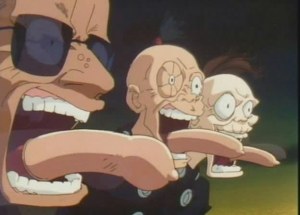 But still. We have a post-apocalyptic Japan. And two siblings raised by a single dad and trained so that they could morph with a super armor that’s kinda alive. (Kill la Kill-ish). The girl duns goof’d. She becomes evil. The brother is a real gentlemen and fights monsters. Kewl. Now we’re getting to the interesting part.

First, we get a bear with six tits and our main character fighting it while being naked in the snow. Makes sense.

Second is Beauty. The not so little lady with spikes on her feminine parts. She likes boys so she kidnaps one, SUCKS HIS FUCKING FACE AND PUTS IT (the face, that is) ON HER FUCKING NIPPLE. Because…sense.

Then comes the cute little nurse who lets three fugly boys with penises instead of tongues finger her WHILE FUCKING MELTING THEIR HANDS WITH HER VAGINA.She fights the main characters with her FUCKING HUGE ASS TITS AS WEAPONS. Not to mention her vajayjay is a ginormous mouth.

And then. For the grand finale. We are pleased with an octogenar whose main weapon is HIS FUCKING PENIS FROM WHERE HE SPITS SOLID

And if you don’t think this is fucked up I think you need Jesus in your life.

This, my friends, is stupid. I don’t even think I have to talk about the storyline as nothing much happens except for the fighting where, really fast, we understand that our protagonist has to defeat his evil sister who created the monsters. There’s also some shitty romance where a girl cleans up the main character’s desk and he goes like “I think I’m starting to have feelings for this girl”. Yes. Really deep.

And why does everyone looks SO FUCKING UGLY? It’s ridiculous. No. Erase that. THIS ENTIRE SHOW IS RIDICULOUS. I can’t even, right now. I am at that point where I cannot even. I just don’t know what life is anymore.

Is it worth talking about plot holes? Because this thing right here shits on logic. First of all, we get no explanation on how humanity managed to fuck up so badly that their ruined the world. And, okay, the world has been ruined, but they still have to go to school? I mean, come on. That would be the perfect excuse NOT to go to school. AND WHERE ARE THE PARENTS? Did only the young survive? HOW CAN YOU LIVE WITH SO MANY GIANT ASS COCKROACHES?

To sum it up, Apocalypse Zero might be the biggest mindfuckery I’ve seen so far and I think it was made up from nightmares.

Really. What the fuck did I watch?

4 Responses to WTF did I watch Wednesdays: Apocalypse Zero