That Dragon, Cancer – why did I get a refund

That Dragon, Cancer is a indie walking simulator about the short life and way too sudden departure of Joel, who died at only 5. It’s a heartbreaking, tough to digest story as you hear every detail from 2 doomed parents. Their child was dying. Their child is dead.

First and foremost, That Dragon, Cancer is not a game. It’s an experience. And, yes, I know this is the most cliché thing I could ever say about this game or any other, but, to be honest, it is also the truth. There’s nothing ‘gamey’ about it. You will only be required to click that mouse button a couple of times. And to listen carefully.

This might be too real. This is not Joel’s perspective, but his parents’. And you get to feel

the dread because you’re dealing with mature feelings and thoughts. You’re dealing with depression, worrying, despair, lack of power and control. What would you do if your child was dying and you couldn’t do anything to help him? I hope none of you reading this will ever find out. However, should you be curious about it, buy this game. Take a look. Die a bit inside. Play this and then wonder how Amy and Ryan, the creators of the game and also Joel’s parents, have managed to make it through without losing all their sanity.

In almost 2 hours of ‘gameplay’ you will be presented not only with the parents’ perspective, but you will also get to read and listen to other people’s similar experiences: cancer survivors, those who have lost their dear ones to the illness and those who lost the battle.

So what’s settled until now: That Dragon, Cancer is not a game. So don’t be like me and expect a playable experience because you are going to be disappointed. It’s not a lesson

either. You don’t really get to learn, you only get to observe. What’s there to learn? Maybe, should I go around the corner, this is the lesson: that you can never learn how to deal with death. Maybe you will accept it, in the end, or maybe it will drive you crazy. But there’s nothing that can teach you a ‘good’ approach. Because we’re human and we have feelings which are, most of the times, more powerful that our reason.

But how can I explain why did I request a refund for this game without sounding like a heartless bitch? Was I not touched by the story? Was I not moved by Ryan’s letters of despair? Did I not approve of Amy’s faith and hope?

Of course I was. I have a soft spot for tragedies, but that was not enough for me to want to keep the game in my library. Was it entertaining? No, of course not, but was it supposed to be entertaining? God, I hope not. Did I have fun ‘playing’ it? No. And, again, I’m pretty sure it was not intended to be so. Did it make me feel? Yes. But did it make me cry? No. 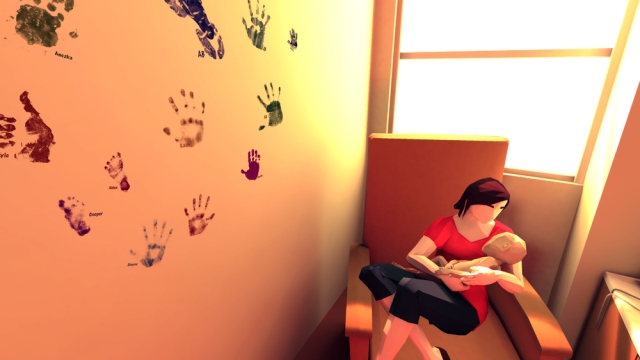 This felt incredibly wrong since the very beginning. It makes you feel like an intruder, as if you’re spying on someone’s life and I have never been so uncomfortable. And mostly because you this feeling, I did not find it to be an interesting experience.

I feel very selfish and soulless to say this, but it’s the truth. For me, this was not an interesting game. It is sad and cruel, but it did not make me cry or weep or be depressed. I said it will stay with you, and it will, but at a certain distance. It will be ‘those 2 parents who lost their son to cancer’.

That Dragon, Cancer is not something I will want to replay, nor is it something that I feel like I need in my Steam library. I gave it a try and it was enough for me. I don’t want to deal with their pain anymore.

4 Responses to That Dragon, Cancer – why did I get a refund